Back to other exhibitions >

> See the PDF of the Gilles T. Lacombe exhibition at Nordart 2018

>Visit the exhibition site at www.kunstwerk-carlshuette.de

A disquieting, delirious and striking image of gastropods made of gum and hairs gaping in fear at a lead cloud.
Accessories for a fashion that seems to have traversed the millennia, the poor beasts seem crushed under the wrath of the sky, their silent yelps making hairs rise.
Facing them, elegance itself. A four meters nuclear missile.
Terror.
When viewed up close, the suspended monster divides into several thousand small cells. This clever technique reminds us that any strike force, whatever its nature, is only the alchemy of the elements from which it is composed. Here, small lead pellets – the ones that machine guns use to mow down the rank and file that we are – evoke the number of nuclear warheads available in the world today.
14,000 [1] times Hiroshima to be exact. Precision at the service of power.
Gilles T. Lacombe works in detail. Under his fingers, the tiny constructs the great. The materials are finely combined: ivory, animal hair, marble, iron, wood, gold and lead. Truly an original periodic table. In his studio, radioactive uranium decays to become lead [2]. Everything must go… all the better to be reborn perhaps? However, we are warned: “don’t push”. A hopeful adage for a bawling humanity?
Refusing to indulge in symbolism by numbers, Gilles T. Lacombe likes to (re)count the world and its movements. Everything freezes in a smile, before doubt sets in, then understanding. The thousands of small lead weights gesticulate, the instability of the mind takes over. And so it goes, we are all foxes under this lead cloud.

[1] An estimate of SIPRI (Stockholm International Peace Research Institute)
[2] but isn’t it the terminal element of nuclear fission?

About this installation in two movements:
The B61-12 missile is represented at its actual size, 3.56m in length and a diameter of 33cm. A tiny size compared to its destructive power: four times more powerful than the one dropped on Hiroshima.
It has been done with nearly 14,000 pellets, the same as those used by fishermen to ballast fishing rod lines. The same used to fill the hunting cartridges.
Lead has become the good choice of material to represent a weapon made to kill.
All foxes were not found on the road, but on the internet. The habit that chic women had to wear this fashion accessory seems completely outmoded, outdated.
Who can still wear an animal with the head, tail, legs and even claws around his neck pretending to be chic?
The text evokes the time when stores are trying to get rid of unsold things…
The foxes transformed into curious snails seem to flee. 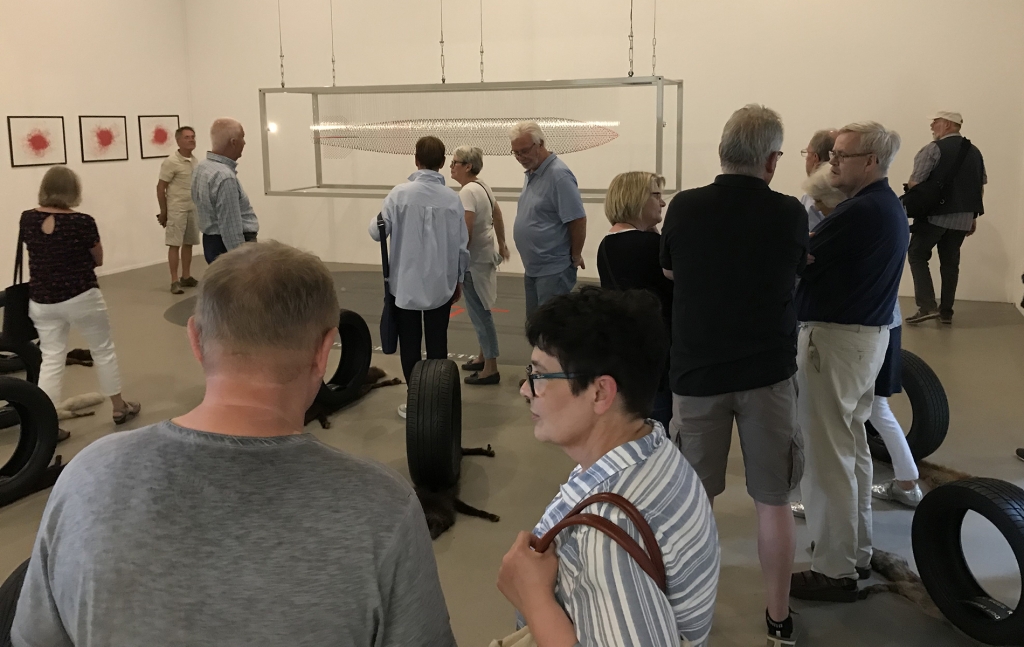